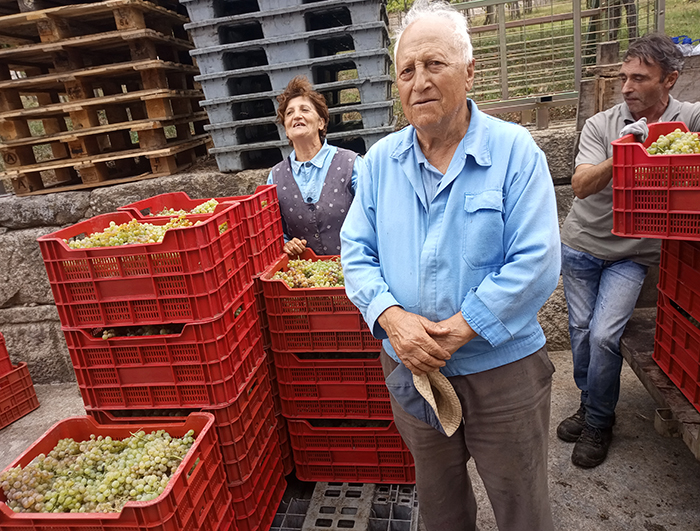 From her headquarters in the most rural areas of Galicia, where she controls the vineyards and elaborations of the Galician Atlantis, Iria Otero, winemaker, tells us that this 2019 vintage will be remembered as one of the highest quality in recent
years, a vintage to “enjoy and lay down”.

How would you assess the 2019 vintage in Galicia?

The 2019 vintage has been one of the most intense in recent years. The harvest was slightly early, but the weather and a somewhat stressed vine, have made it last longer. And yet, it has been one of the best I remember… the quality, in each and every one of the areas in which we make Atlantis, has been exceptional.

After an unusually warm start to spring, the vine woke up about 15 days earlier than usual. However, the rains and cold recorded in the first days of flowering, resulted in a high rate of creep, which occurred more intensely in Rías Baixas. The summer was quite warm and without significant rainfall, so ripening was slightly delayed towards the end of the cycle. This caused general ripening in the different zones to have been very unequal, with high alcohol grapes and others with high acidities and more restrained alcohol levels. The end of the harvest was marked by several days of rains, causing harvest to be prolonged in areas such as Ribeiro.

How has it affected the vineyard?

In Rías Baixas the problems in flowering have resulted in very low yields, with the harvest ending up with about 30% less production than expected. In Ribeiro, the ripening has suffered ups and downs, leading to a harvest with a more subdued volume and somewhat fresher grapes than other years. In Valdeorras, however, an area that in the last 2 years has suffered intensely from the inclement weather, this year it was lucky and the Godello grape has entered the winery before the rains and in excellent
conditions.

How has the harvest developed?

The start of harvest was slightly early compared to other years, although not as much as expected at the beginning of the cycle due to the stress suffered by the plant during the summer. However, differences in ripening led to end- of-harvest dates coming close to normal values.

Can you give us any insight into the profile of Vintae wines in this vintage?

Despite the difficulties mentioned, everything seems to indicate that the 2019 harvest will be remembered as one of the highest quality in recent years. The grapes entered the winery in an excellent sanitary condition, and with all the requirements to give rise to sapid, round wines and the freshness achieved will sustain them over time and make them very long-lasting. Without a doubt, a vintage to enjoy and keep.

“In Aroa Bodegas, the wines will have color, concentration and will be very aromatic”

In Aroa Bodegas, the tonic has been similar to other areas, less grape than other years but “very good quality”, says Iñaki Olaberri, our Navarra winemaker responsible for the winery located in the Yerri Valley.

“This year the rains arrived late and nearly didn’t arrive at all…”, he jokes. This circumstance caused the harvest to start early at first, it then held back and in the final phase it was not rushed. “This has given us high quality, lightweight, concentrated grapes,” says Olaberri. As for varieties, the White Garnacha was the one that was early, then the Tempranillos and Merlots were “more or less on schedule” and finally the red Garnachas and Cabernets, somewhat early “.

In general, the assessment made by the winemaker of Aroa is very positive. As for the profile of the wines of the 2019 vintage in the Yerri Valley, he predicts “a lot of color, concentration and very aromatic wines”.

Any cookies that may not be particularly necessary for the website to function and is used specifically to collect user personal data via analytics, ads, other embedded contents are termed as non-necessary cookies. It is mandatory to procure user consent prior to running these cookies on your website.